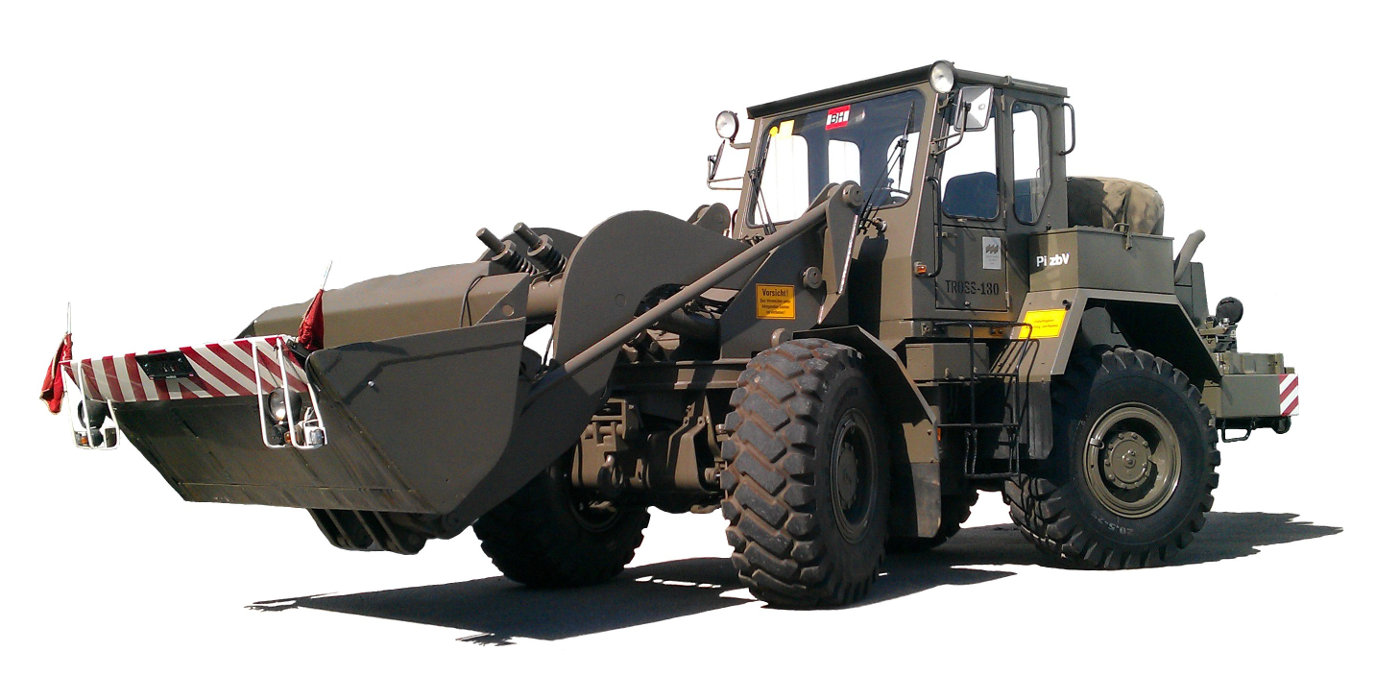 Starting in 1980, Austrian company VOEST-ALPINE developed the TROSS 130 as a multi-purpose support system for Engineer and Supply units. It replaced the previously used German HATRA loaders and was supposed to work as a heavy loader and recovery vehicle (with the Engineers) as well as a heavy forklift and crane (for the Supply units). While most competitors by the early 1980s had moved to articulated chassis solutions, VOEST-ALPINE still favored the swivel loading concept with a straight chassis and the loading arm mounted on a 360° swivel in the front.

The front axle is rigidly mounted on the chassis, while the rear axle can tilt up to 22° from horizontal. To stabilize the vehicle during lifting operations, this tilting system can be hydraulically locked in any position.
The arm is equipped with a quick-change system to replace the bucket with the two lifting forks normally stowed on the back of the vehicle. When these forks are attached upside-down, the boom can be used in crane mode for hoisting loads up to 6 tons.

The vehicle is powered by an MAN D2565 inline 5-cylinder turbo-charged diesel engine producing 160 HP via a powershift transmission and torque converter. As one of the development requirements was the capability to participate in road marches without the need for loading it on a trailer, the vehicle is designed for a top speed of 62 km/hr which makes it able to use even the Autobahn (motorways). As these chassis (like any agricultural tractor) have no suspension but only rely on the shock-absorbing capabilities of the large tires, the relatively large mass of the boom and bucket in the front of the vehicle causes excessive resonance at higher speeds. To avoid such resonance and make the vehicle operable, the boom can be suspended on two torsion springs and hydraulically decoupled.

The first TROSS 130 were delivered to the Army on March 25 1983 in the VOEST-ALPINE Zeltweg works. In the wake of the Noricum scandal when Austrian-produced GHN-45 howitzers were found in the Iran/Iraq war, the VOEST-ALPINE management decided to immediately terminate the production of any military equipment. Thus, after producing only 25 TROSS 130 loaders (24 delivered to the Army plus the initial prototype still in the Zeltweg works), no more loaders of this type were produced.

The TROSS 130 marked the pinnacle but also the end of swivel loader systems. The general move to articulated chassis systems makes this vehicle pretty exotic – especially when encountering it on the Autobahn.

Our vehicle carries chassis number 20 and was delivered to the Army on December 2 1985. It saw service with the Engineer Company in Schwaz in Tyrol and was retired from active army service in 2008. 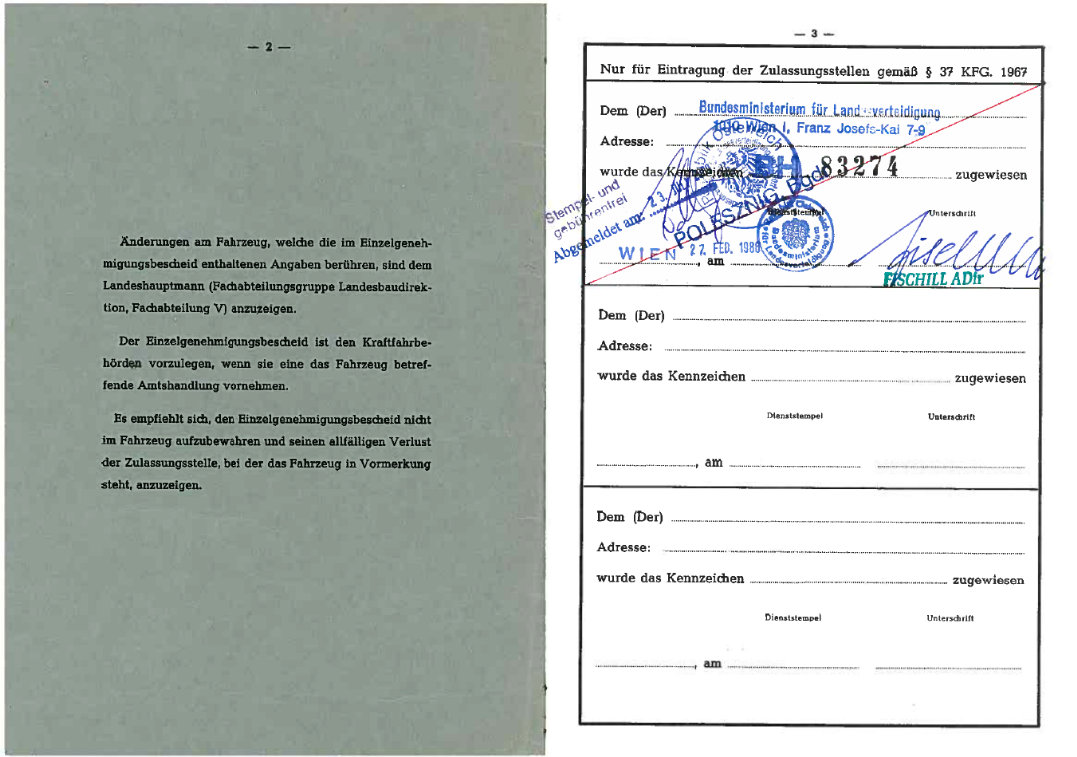 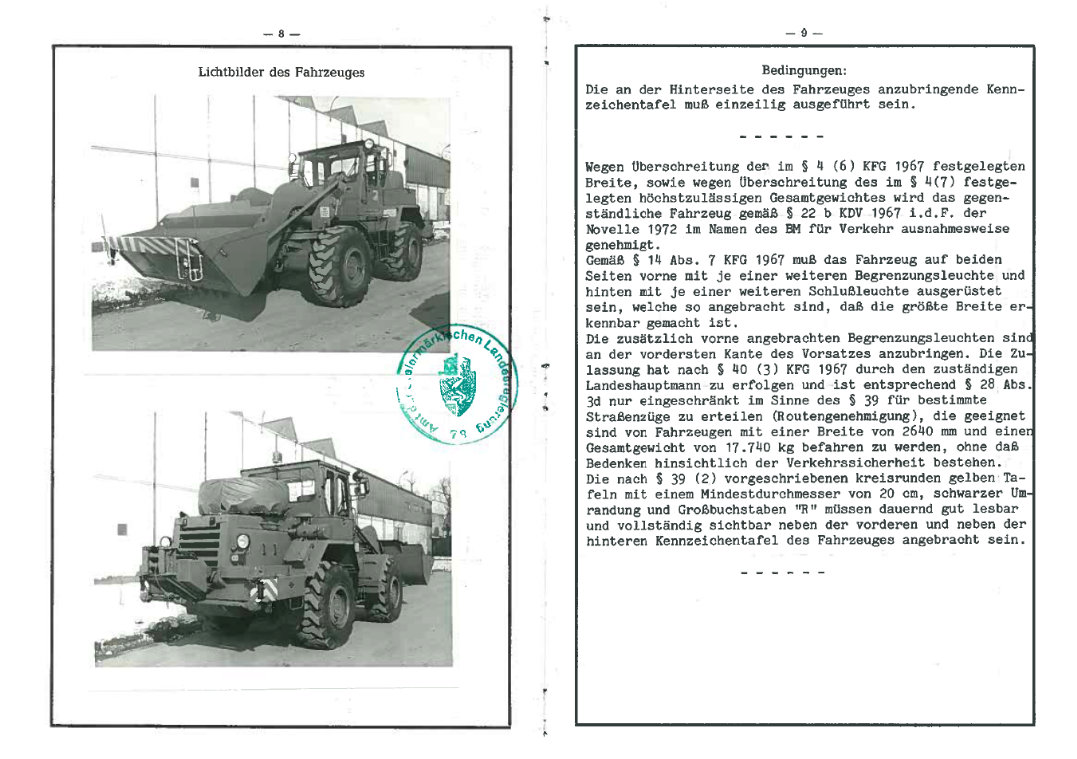 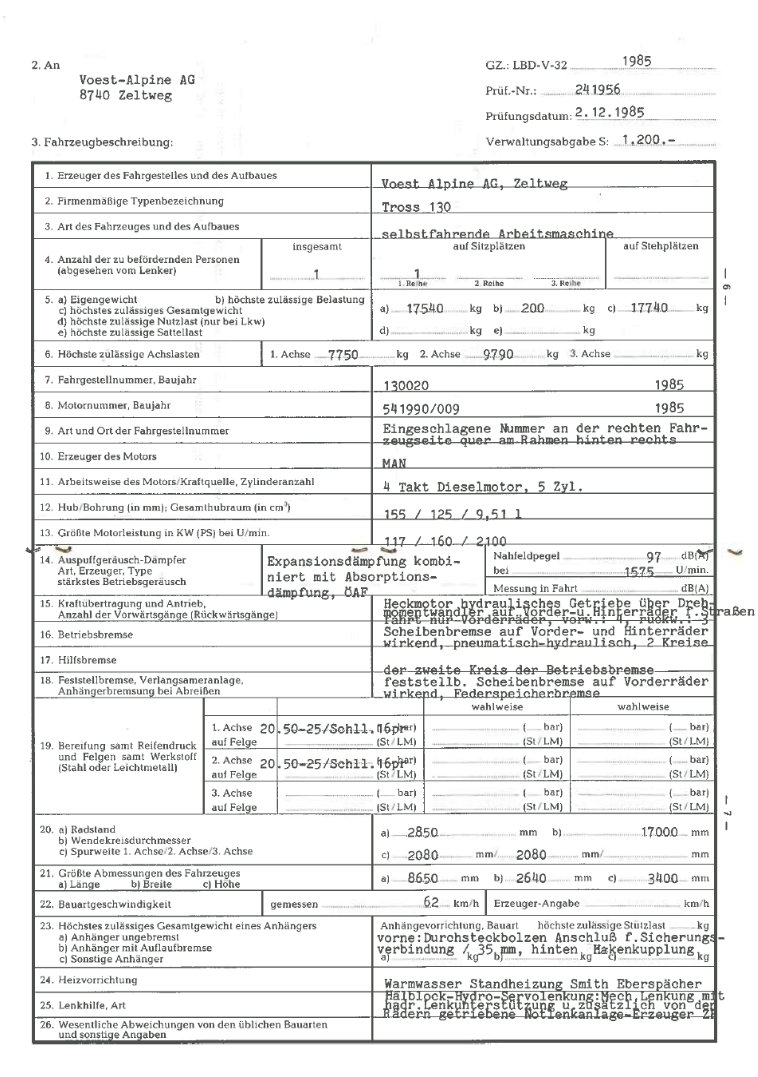