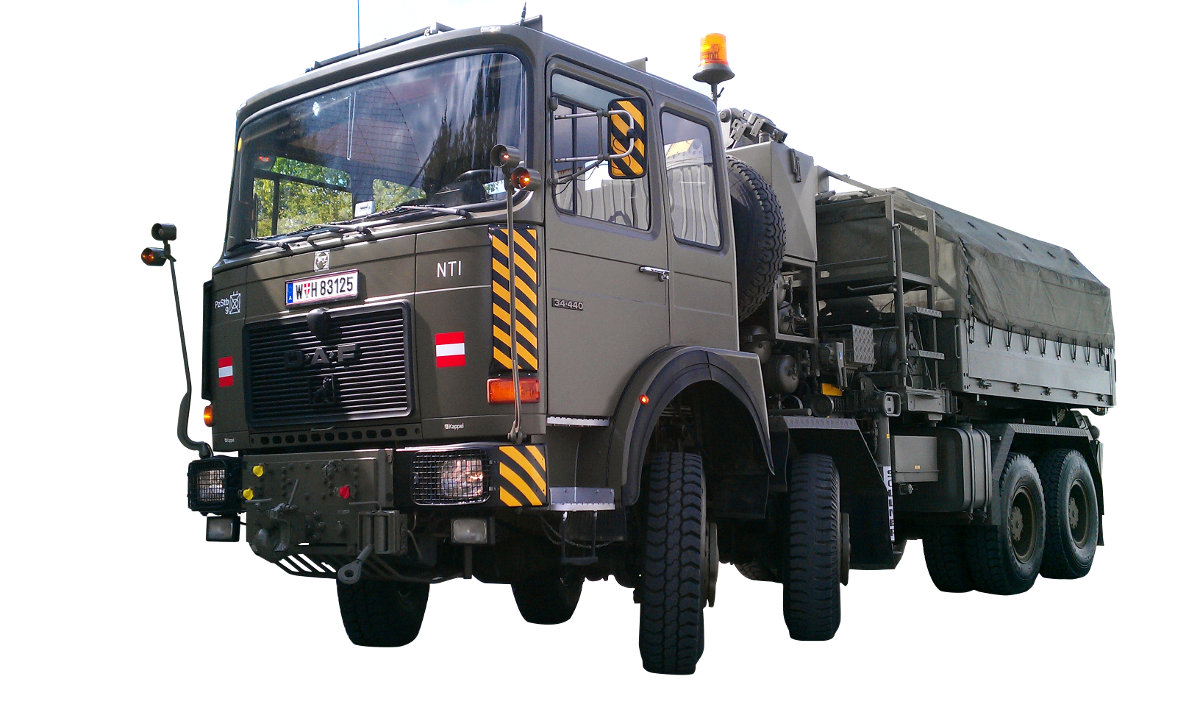 The heavy tractors with their 440 HP V10 diesel engines were developed by ÖAF at the beginning of the 1980s to replace the Gräf & Stift ZAFD 230 vehicles in service until then.

Together with the also newly introduced Goldhofer 8-axle low loader trailers, they were designed for transporting tanks up to 55 tons gross weight and have been in active service from 1984 until today. Originally the heaviest loads were the M60 medium battle tank and the M88 recovery tank, with the introduction of the Leopard 2 main battle tank the systems were slightly upgraded for a total combined tractor/trailer gross weight of 115 tons.

The 8x8 configuration of the chassis was selected not for its off-road capabilities but for the ability to maintain enough traction under all towing conditions. In order to ensure enough traction on the eight rear wheels, the vehicles were equipped with 13 steel plates (each weighing 1 ton) in the front part of the loading platform, providing a ballasted weight of the tractor of 34 tons. Most of the drive train was adopted from civilian heavy-haulage designs available from ÖAF/MAN. By the end of 1982, a first prototype system consisting of a Type F7 ÖAF 34.440 tractor (still with sliding doors) and an 8-axle Goldhofer low-loader trailer was delivered to the Army, and trials commenced at the Tank Battalions and the Army Driving School.

After successful trials an initial order was placed for three systems in September 1983, with a total cost of each system of about 6-1/2 million Austrian Schillings (about half a million EUR). Until 1984, a total of twelve systems were procured (the three tractors from 1983 can still be recognized by their Type F7 sliding doors, the later 1984 systems already had the conventional doors of the Type F8 cab).

The engine selected for these tractors was the MAN D2540MT, by the late 1970s the strongest MAN engine available for street hauling operations. From its 17.43 liter volume the V10 produces 440 HP, and together with the ZF Transmatic (8-gear manual shift transmission with low reduction gears and torque converter) the vehicle was rated for the required 115 ton total weight. Many parts and solutions (like the hydrostatic cooling fan) were adopted from the ÖAF gl sLKW developed for the Army just a decade earlier.

The vehicle was equipped with two hydraulically-driven 20-ton winches to the rear for recovering heavy tanks onto the low-loader trailer. For self-recovery out of tight situations it also had an 8-ton hydraulic winch which could pull to the front and to both sides of the vehicle. In addition, a small hydraulic 600-kg winch was installed to the rear for pulling the heavy 20-ton cables to the vehicle to be recovered. An 8.2-ton hydraulic Palfinger loading crane mounted just behind the cab allowed manipulation of the 13 tons of ballast steel on the platform.

The 55-ton low-loader trailer was specially developed by Goldhofer and equipped with two draw bars to allow reversing it in narrow alpine valleys where no turning around of the trailer was possible. The concept had the tractor pull the trailer to the broken-down tank, then drive over the trailer and hitch onto the other side, draw the tank onto the trailer and exit the valley. However, the idea had two major drawbacks, one being the question why a battle tank would have ended up in such a narrow valley to begin with, and second the discovery that when attempting to drive the fully ballasted tractor onto the trailer one front axle would completely lift off the ground, effectively overloading the other front axle and potentially damaging it.

Our vehicle was initially in service with the 10th Tank Battalion in St.Pölten. After the Battalion was disbanded, it was transferred to the 3rd Tank Grenadier Brigade in Mautern, from where it was sold off in November 2011. After full restauration it ended up in our collection, being the first of its kind out of active service. It was given the tactical markings of the 9th Staff Tank Battalion in Götzendorf and now preserves the tradition the 9th Tank Grenadier Brigade, both long disbanded.