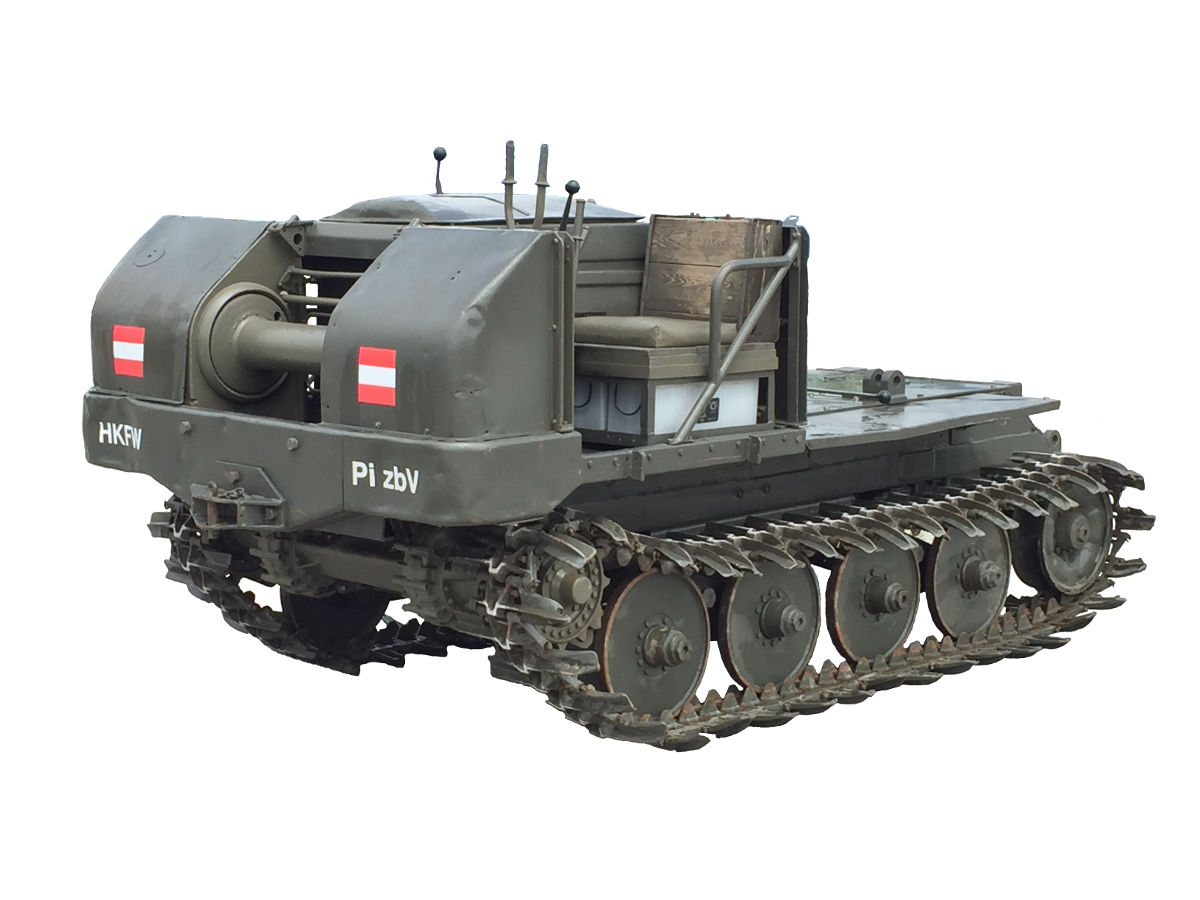 After the end of WW2, Austrian engineer Oskar Hacker developed a small agricultural tractor based on his experience (and a stock of surviving spare parts) in developing the Steyr “RSO - Raupenschlepper Ost” (tracked tractor for eastern-front service) for the Wehrmacht during the war. These small tractors were based on a diesel engine mounted centrally in the front of the vehicle, driving the two tracks via a standard 4-speed transmission and drive shafts back to the final drives in the front of the vehicle. The Motormuli KG was first started in Vienna and by 1950/51 was transferred to Molln in Upper Austria.

Initially the vehicle was available with two engine types, either the M30 with a 30 HP / 3 cylinder diesel or the M60 with a 60 HP / 4 cylinder diesel engine, both built by Steyr. Later a heavier version with the 80 HP engine was introduced. The vehicle is controlled via two steering levers (opening the clutches in the final drives), manual throttle, a clutch-pedal for shifting the transmission and two steering brake pedals.

There were two different versions of running gear – probably because of the available part inventories. One is based on the classic “RSO” design with four large road wheels, the other one based on two swing-mounted bogeys, similar to the running gear of the PzJg 1.

The Austrian Army tested several prototypes of the Motormuli, one of them equipped with a man-hole drilling machine transferred off a GMC chassis, another with a trench-plow.

The Motormulis saw their main civilian service as forest tractors, unfortunately the Motormuli GmbH was not to survive very long, which also explains why only a limited number of “Mulis” were built – and an even smaller number survived. Currently there are only five or six still running “Mulis” in Austria, three of them in our collection plus another one in the Austrian Postal Services Coach Museum in Salzburg. This “Muli” had been fitted with a coach cab and used for people transportation in the Alps.

Another (non-military) use of the Motormuli started in 1953 on the Großglockner Alpine Pass. Franz Friedrich Wallack, designer of the Großglockner pass road 1930-1935, in 1952 developed a rotary snowplough to accelerate cleaning of the road after the winter. Until that time, this task had been performed by 300 people over a 70.day period. Wallack used the Motormuli running gear and transferred a new and stronger Saurer 6-cylinder engine into the upper Body of the vehicle, driving the tracks via hydraulic motors. The carriage was now designated as M100, which was not exactly accurate as the Saurer engine provided 125 HP. Between 1953 and 1963 a total of five Vehicles were delivered to the Großglockner Pass road maintenance Team. Four of these snowploughs are still in service today with the Großglockner Pass road maintenance Team, the fifth (and oldest) vehicle has been on permanent loan to the Salzburg Museum in Großgmain since 2012.

With the end of the Motormuli KG, Oskar Hacker together with several engineers and the complete set of construction drawings moved to the Saurer Works in Vienna (and later to Austrian steel Company VÖEST). It seems as if Saurer – due to the restrictions imposed on Austria by the allied occupational forces on all kinds of military tank development – used the cover of the „Saurer Muli“ agricultural tractor to start initial trials for the new Saurer Armored Personnel Carrier. The following picture dates from this period, showing a Saurer Muli with Saurer SPz running gear components.

One of our Mulis is on permanent loan to the Austrian Museum of Military History (“Heeresgeschichtliches Museum”) in Vienna, where it represents the first tank-type vehicle produced in Austria after WW2 in the new “Panzerhalle” of the museum (open every first Sunday of the month, also see www.hgm.at).